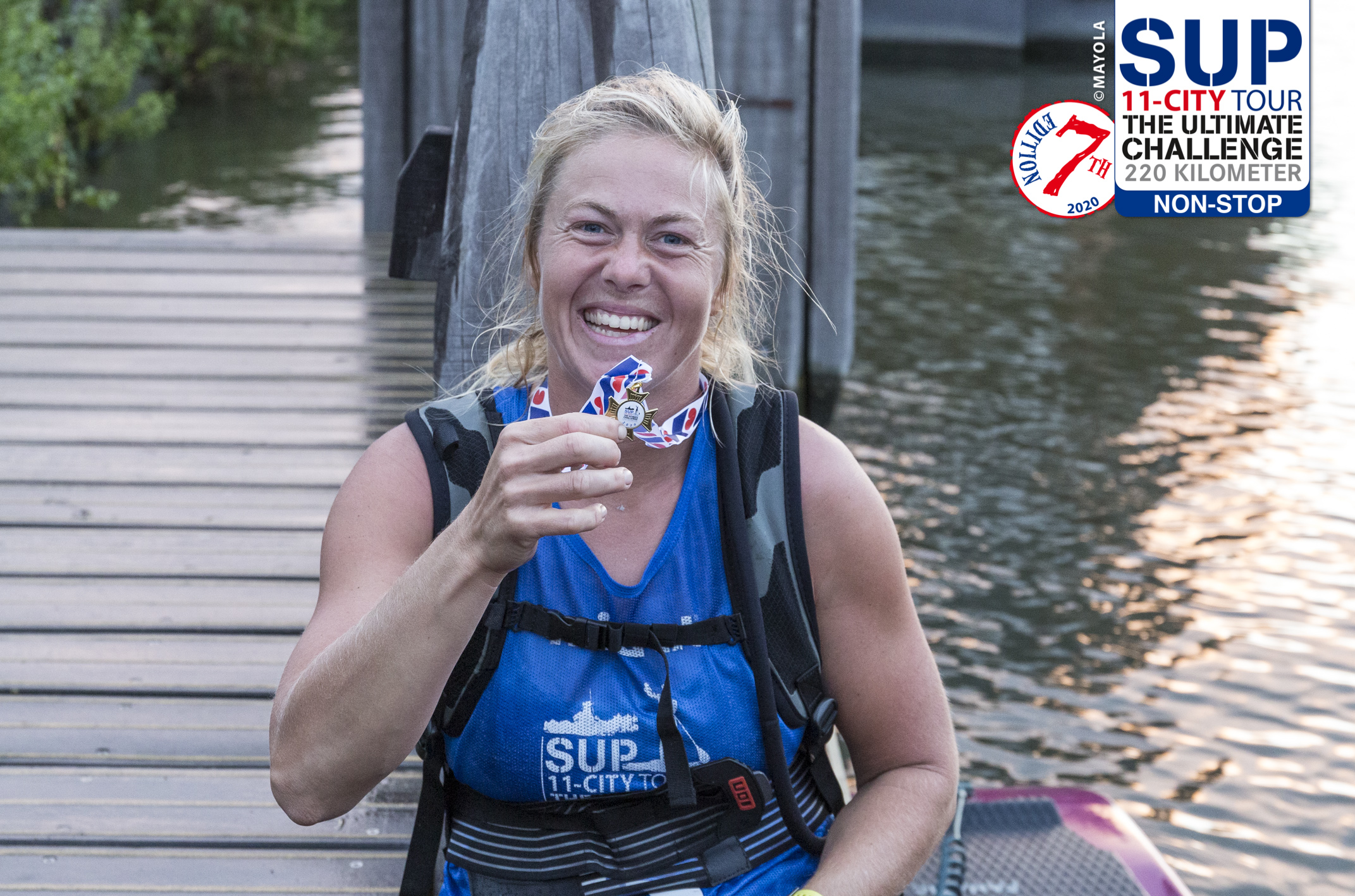 As we all know Anne-Marie had to stay on Maui, due to the travel restrictions. But even though she wasn’t in Friesland during the NON-stop she was following it online by our social media channels and some input from us again. This is her write up of an amazing 7th edition of the NON-stop. Enjoy!

Emma Reijmerink, the only women this year, left Leeuwarden ‘unsupported’ having all her supplies and support on her own SUP board. The rest of the fleet were 13 SUP solo guys, 4 SUP teams (where team members share the paddling distant of 200 km) and 1 prone paddle team from Scheveningen, The Netherlands.

The sun was out the crack of dawn and so was the wind; which made it tough. Especially the head wind and waves on the Slotermeer towards Sloten followed by more lakes. And of course followed by the beautiful Luts after Balk. Thankfully the wind died down in the evening which was a welcome present from Mama Nature.

Thanks to the GPS trackers, athletes were able be followed online. To see where they are for the organization and followers but also when they go the wrong direction. Thankfully there were made only a few mistakes, the organization was able to correct them, so they went the correct way again.

Hans Schouten – Race director: ‘This was a very good NON-stop edition. All the elements were there, a very windy Slotermeer and a beautiful night. It was a classic NON-stop with no big incidents. Good that everyone is back in Leeuwarden.’

The half way 12 hour point was for the biggest part of the group easily made by everyone this year in the city of Workum. Mattias Vagt from Hamburg, Germany, left at 12:00 am sharp.

Paddling through the night is one of the unique elements of the NON-Stop. Only the safety lights on the boards and sometimes the sound of a splashing paddle can tell there is someone ‘out’ there in the pitch black. Anne-Marie Reichman – Totah, founder of the SUP 11-City Tour: ‘Elements and senses are definitely altering. And then paddling back into the Sunday sunrise is something very special! But once the sun is up, your body hurts and the stretch to Dokkum and back to Leeuwarden is for sure “the Hell of the North”.’

Niek van der Linde our NON-Stop top athlete for many years and Ricardo Haverschmidt who joined the NON-Stop for the first time this year, were battling for 1st and 2nd, but then Ricardo left his hydro pack and had to return to his last support station. Niek took over the lead and kept it, he finished in 25 hours and 13 minutes. Ricardo ended up being back in Leeuwarden just over 26 hours. It was a real battle between Herman van der Berg and Richard Proost. Herman started at 10:00 am Saturday morning and Richard at 12:00 am. So only till the last minutes when Richard was arriving back on the finish, it was clear: Richard just got the third place. He was 4 minutes and 14 seconds faster than Herman van der Berg. Both were ‘first-timers’ of the NON-Stop version of the event.

Too bad not everyone completes this journey, but that is the way it goes. A lot of elements need to line up to keep going 25 to 36 hours! Mello Boer, Mattias Vagt, Kevin Kohn and Thomas Schillig ended before the finish. Although Thomas, did paddle back to Leeuwarden, but not via Dokkum in a time off: 30:39:54.3.

Tanja Ecker from Team Nonstoppables: ‘It was not only about paddling your stage, but being there for your team mates, cheering them on, dancing like hell and being together. This all makes it special’.

A big props up to everyone for finishing this event in sun, wind and rain. Every year the weather conditions vary, but there is one constant: smiles and happy spirits along the way from  supporters and crew. And we all need that; because with a lack of sleep and the ‘man with the hammer’ will come along the way.

Congratulations to Emma Reijmerink for finishing her unsupported NON-stop mission! The last legs always are heavy and when your legs don’t like to work with you, your spirit needs to take over to get there again. So great to see the SUP 11-Crew and Team Fanatic Benelux crew being with her till the end. She passed the finish line with less than a half a minute to go! Talking about ‘keeping it exciting till the end’!

Also worth a mention is that Team Fanatic Benelux had an extra motivation; raising money for the Mentelity Foundation. “It is all about Mentelity” is the slogan. And this is what comes in play on an endurance mission like this!

A huge Mahalo to the Organization (see the capital O)  all the athletes, sponsors, supporters, and everyone online following and supporting!
Next start will be on Wednesday in the Prinsentuin Leeuwarden; where the 5-day event kicks off.

One last quote from the support team of Marek Splichal & Richard Wiesner. Tom Novak: ‘It’s not crazy to drive 1500 kilometers back to Czech Republic straight after the finish of the NON-Stop, no, this race is crazy!’